The Benefits of Rail Freight

The use of rail, rather than road, for freight distribution has several key benefits, including:

Reliability – The moving annual average for punctuality for rail freight on Britain’s railways in 2021 was 93.8%.

Cost-effectiveness – longer distance transits should be cheaper by rail than by road.

The Environment – on average, rail freight emits just 33% of the CO2 of an equivalent journey by road.

There are additional benefits in security of freight in transit, a lower level of accidents, reductions in road congestion, and lower levels of other emissions.

Every three months, the Office for Rail and Road provides figures on railfreight punctuality. Arrivals of all freight trains are measured within a 15-minute window of their booked time. The latest figures available (ORR, 2022) relate to the calendar year 2021 and show a moving annual average for punctuality of 93.8%.

On-time arrival for rail freight has been the source of several recent organisational campaigns by freight operators and infrastructure company Network Rail alike. Despite the relative busy-ness of the British rail network, these punctuality figures compare well with other distribution modes and have been improving. The punctuality statistics for premium freight trains (such as those carrying supermarket goods) have been as high as 98%.

Railways do of course have the advantage of running to a timetable, which enables periods of higher demand to be managed in a more professional manner than on the roads, where queues of traffic simply build up. Rail transport will then generally know in advance which journeys are likely to be slower. However, disruptions can result from passenger trains, infrastructure problems and external incidents, which are managed by a combination of Network Rail’s signalling centres and freight operators’ own control centres.

However, with modern signalling equipment, the increasing use of IT enables both the easier management of rail operations and the goods it is carrying. Network Rail knows the position of all trains running, hence it is easy for FreightArranger to locate customers’ containers at any point in time. Customised arrangements can be made to inform shippers automatically if a delay of greater than a preset amount is likely. This information is the first step in developing a response which mitigates the consequences of the delay. Pre-prepared contingency plans help to minimise the impacts of disruption, when it does occur.

Rail freight can be more cost-effective than distribution by road. This is possible through the underlying characteristics of rail:

There are, however, some additional costs which can be incurred in a rail journey if the terminals are not immediately adjacent to traffic needs, as happens in docks and at rail-served warehouses. A road delivery may be needed at one or both ends of the journey, whilst will be a lift cost to transfer the container between the train and the road vehicle.

Consequently, longer journeys tend to be cheaper by rail, and shorter journeys are cheaper by road. Where the point of cost neutrality comes is governed by many factors which are route- and commodity- specific, but in general the point of cost neutrality can be expected to lie in the range of 130 to 150 kms. Increasing congestion on Britain’s motorways is reducing this figure, whilst the use of rail assets in marginal time can sometimes make even shorter journeys competitive. Over the longest distances, ship can be cheaper – but only if appropriate large waterways are nearby, which is not the case for key cities such as Birmingham. 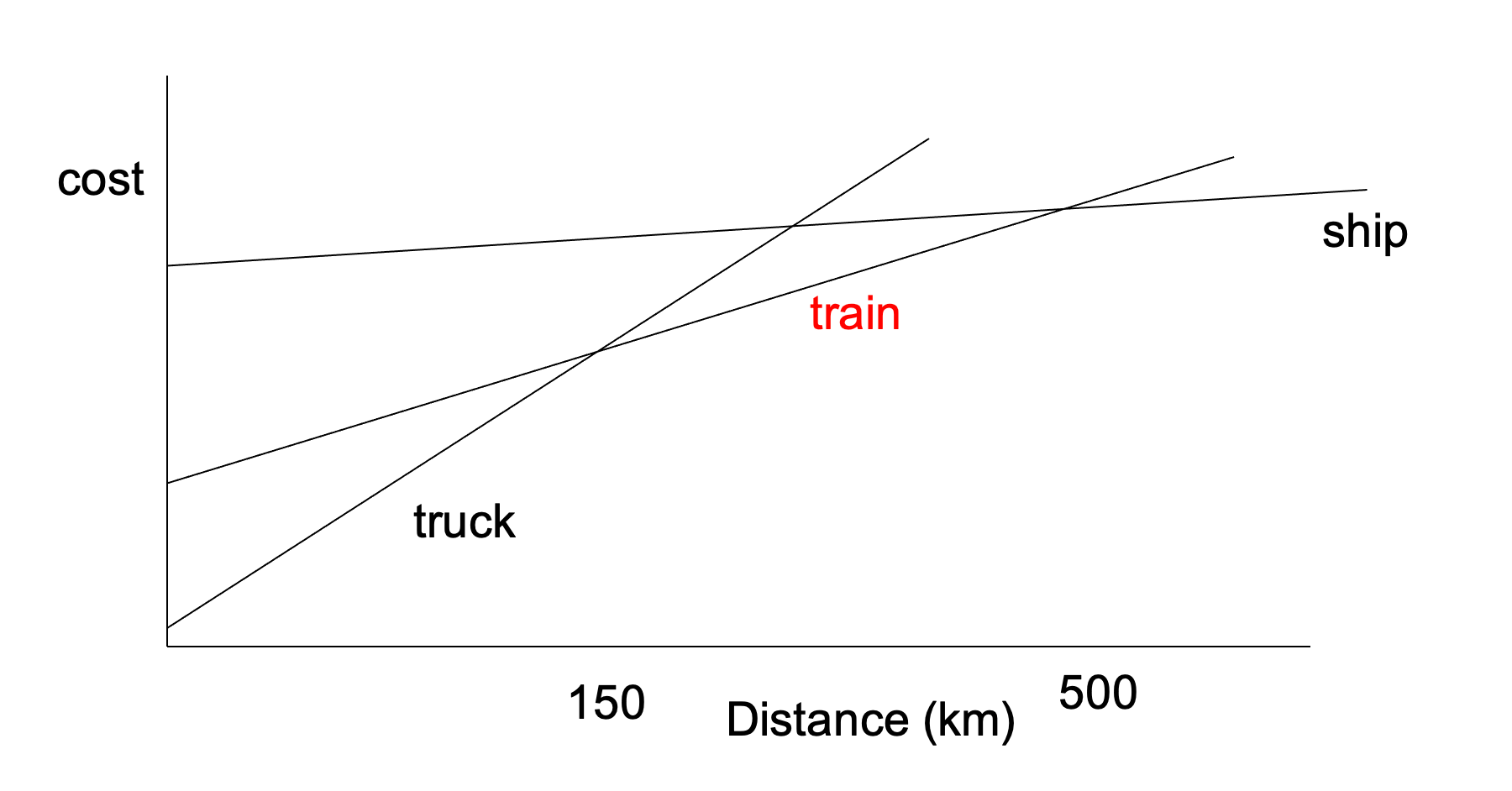 Brexit, Covid and other pressures on the economy have highlighted the shortage of truck drivers in Britain. This has variously (e.g. by the RHA, 2021) been estimated at up to 100,000 posts. Even if a round rail trip needed four train drivers and a couple of truckers doing local delivery at each end, the goods on a train carrying 24 containers would otherwise need at least three times as many drivers.

Many manufacturers, shippers and logistics companies have simply been unable to find sufficient drivers in recent years, as retiring truckers are not being replaced by younger adults. Those companies that have managed to maintain staffing complements have often only been able to do so by significantly increasing truckers’ wages, thereby tipping the cost-effectiveness balance more towards rail.

The environmental benefits of rail freight distribution compared to road have received much publicity and increased use of rail is one of the means which large companies subject to carbon footprint reporting are seeking to reduce their carbon emissions.

Because of the inherent efficiencies of the rail mode noted above, the smoother route gradients and rail profile associated with running trains, and the pre-planned schedule minimising stops, the overall carbon footprint of rail operation is much lower than that of the corresponding road operation. Figures calculated by the Rail Freight Group suggest CO2 savings of 78% when rail is used instead of road.

Larger UK Companies are increasingly adopting carbon reporting and setting themselves carbon reduction strategies, sometimes driven by their management, and sometimes by their shareholders. This has multiple objectives: in part to improve their image with consumers, in part to achieve cost savings and in part to obtain tax advantages. The logical consequence is that the pressure to reduce carbon footprint is cascading down the supply chain and into smaller companies as they seek to improve their profile with their larger customers.

Use of rail freight also helps to reduce road congestion on the Strategic Road Network. Road congestion has been estimated to cost UK businesses £24 billion per year (FTA).

Rail is acknowledged as being a safer means of transport than road, with a lower fatality rate per billion passenger miles indicating a lower level of accidents. Studies for the Campaign for Better Transport (MTRU, 2017) have found that Heavy Goods Vehicles over 3.5tonnes are involved in up to 40% of fatal accidents on Britain’s motorways.

And finally, rail freight is more secure as trains do not run on a public highway with uncontrolled access, so FreightArranger can contribute to total through transit security.